I do not exaggerate when I say that this is THE biggest film event to hit the circuit this year. It does not disappoint, and is a reminder to all stalwart fans as to why we have remained loyal to the Force for all these years, even when the Dark Side has threatened to overtake us (we won’t speak of that awful Clone Wars debacle).

The events in The Force Awakens take place 30 years after those in Episode 3 (Return of the Jedi – 1983). So this (episode 7) is the first of a sequel trilogy – I’m not going to go into how all that works again, it’s tedious, so just refer to my previous Star Wars 101 post  to discover the sequence of episodes, prequels, sequels and all that jazz!

What we have here is a very welcome return to much more authentic, original looking, less overplayed special effects. I know you’re thinking this sounds ridiculous – it is, after all, a science fiction action film – but Star Wars purists will understand what I mean. There is much less of the exaggeration that was evident in some of the prequel episodes, which led to a dilution of that genuine look and feel we’d become used to in the earlier films. Thankfully, director J. J. Abrams together with one of his original writers, Lawrence Kasdan, is right back on track here, and not only with his take on the cinematography, but with the script too. Once again, George Lucas plays a creative consultant role – his name being synonymous with the Star Wars franchise – with both Lucas’ and Abrams’ companies (Lucasfilm and Bad Robot) producing. For the first time, Walt Disney Studios Motion Pictures will be doing the worldwide distribution for a Star Wars title. This is a truly exciting and tremendous collaboration of industry giants!

The quips, the witty repartee, the imparting of wisdom: pay attention, it’s

all there! Han Solo, played by the rather rumpled and forlorn, but nevertheless endearing, Harrison Ford still gets the good lines, along with his delightful sidekick Chewbacca (he’s a Wookiee!). Carrie Fisher as General Organa (formerly known as Princess Leia), is surprisingly gentle. She’s understated and refined – I 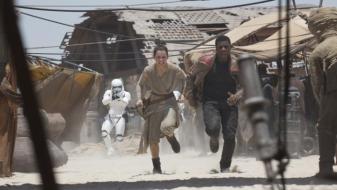 suppose I found her still more of a princess than a General!  Newcomers, Daisy Ridley as the scavenger, Rey and John Boyega as Storm Trooper Finn, are naturals in their roles, and it’s refreshing to watch their characters develop onscreen both as individuals and as part of a team. The incredible Lupita Nyong’o is the wise and wonderful Maz – for me, she’s the Yoda in this piece. You just want to hang on to every word she says! Adam Driver as Kylo Ren (the Darth Vader lookalike), Domhnall Gleeson (General Hux) and Andy Serkis (Supreme Leader Snoke) deliver sufficiently chilling and

evil roles. The only disappointment for me was Oscar Isaac as resistance pilot, Poe Dameron. I felt his performance was far too deliberate and forced, and it just fell flat.

(Just an aside here … Did you know Storm Troopers were human? I didn’t! I can’t believe it took me 7 episodes to reach that realisation! Were we supposed to think they were automatons all this time?)

There’s been much talk about the prominent feminist role in this film, but quite honestly, I don’t know why it has to be taken as a loud statement. For me, the louder message that needs to be heard is Rey’s constant 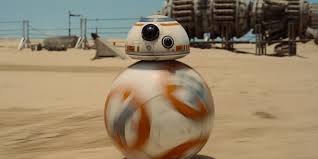 yearning to return home to her desolate planet of Jakku (you’d be forgiven if you mistook it for Tatooine, they’re that similar), before learning that you need to find home within yourself, and with what you carry inside you. But ultimately, although many will interpret it in many different and convoluted ways, it will always come down to the fact that this is a story about the battle between evil and good – in this case, the First Order and the Resistance.

So … as you sit in the darkened theatre and the familiar music plays; as the words scroll up the screen in front of you (in 3DIMAX, I hope), as the goosebumps rise on your arms, settle down in your seat as you feel that warm, comfortable sense of coming home to that galaxy … far, far away.